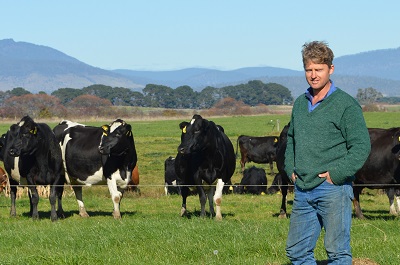 Since converting their first property to dairy in 2008, George and Robert Rigney have continued to carve new paths for the industry as they build on a commitment to sustainability.

With three separate farms totalling 800 hectares, the Rigney operation currently milks 2,400 cows, with George and Robert overseeing a manager on each property and 17 staff members. They pride themselves on being an equal opportunity workplace and were named 2020 Tasmanian Dairy Employer of the Year.

The family’s pledge to farm for the generations has seen several successful projects implemented, focusing on improving both the environmental and economic performance of the business. Some of the key initiatives they’ve undertaken include:  Risk management for feed is a crucial element of the operation, which is why two years ago, George started working with the Farm Source team.

“We wanted to make sure we’ve always got at least 10 months of grain supply on the farm, so we engaged the Farm Source crew – particularly Paddock Specialist Richard Rawnsley – to come and assist our staff,” says George.

“We catch up every month to discuss feed requirements and then conduct paddock walks before discussing what will potentially happen over the next six to eight weeks, which helps us get prepared.”

“We have had a strong focus on staff development and spend a fair bit of time with each manager looking at production and available diet, considering the increase or decrease of pasture growth and the impact in the future,” says Richard.

“We’ve helped enable a powerful learning environment where the farm managers are now coming to me with information even before I visit. This is a great sign of how much they have invested in the process.”

George said the growth in his staff due to Richard’s training was significant.

“They know what they’re looking at now; they can quantify the information, analyse it, extract the useful data and then put it into practice,” says George.

The Rigneys’ work – with support from Farm Source – is securing production benefits, with FY21 milk production lifting 25% – the best season yet in the farm’s relatively short history.

When the Rigneys started working with Farm Source, the average production per cow was about 430kgMS, which has now increased to around 530-540kgMS.

“Working with Farm Source means we’ve seen a huge lift in production and staff development. As a result, the growth we see here is significant,” says George. 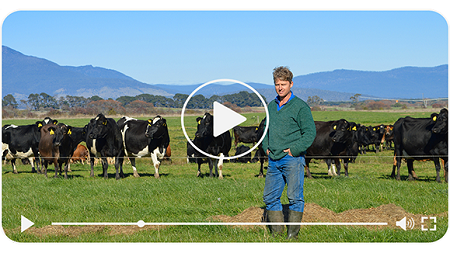